Central Students Publish Book of Stories that Shaped Them 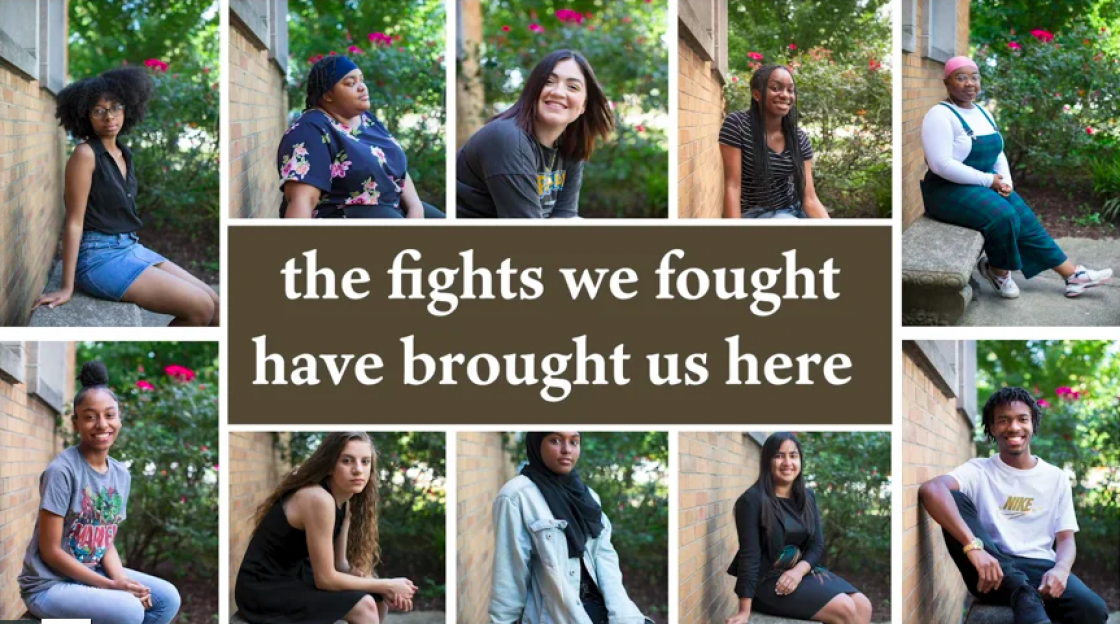 That’s how Craig Wright Jr. mentally refers to the story he’s written, about the hardships his family faced while his dad was in jail, and what it was like growing up without a father.  The recent Central High Magnet Career Academy graduate said he had never really talked with friends about such a personal subject, much less shared those details publicly. But here he was, dredging up the memories in a book that is set to be published this fall, along with stories from nine of his classmates.

The writing experience was cathartic, painful.  “It was definitely difficult writing about such a personal story,” Craig said.  “There were times I’d think, ‘I don’t want to look at it again, I don’t want to reread it again,’ but you have to.  At times I had to take a step back, take a breather, remember where I am currently in life.”

Craig’s story and those of his classmates will be available in The Fights We Fought Have Brought Us Here, a collection of stories by 10 Central students on experiences that shaped them.  The books are available for pre-order now, with a launch party scheduled for October at the Muhammad Ali Center.

The book is the result of a year-long college-level writing course led by the Louisville Story Program, a non-profit organization whose mission is to “amplify voices and stories we don’t get to hear enough,” according to Darcy Thompson, the program’s executive director.  The organization partners with historically underrepresented communities to empower them with the training, techniques and support to be strong writers, so they can share their own stories in their own words.

The rising Central senior was born in Cuba, where she lived until she was 8 years old.  Her father, a doctor, left Cuba to work in Venezuela when she was 4.  “He wasn’t present for four years, but those were four important years,” she said.  “I started school, started to learn things.”

Her story focuses on the way she viewed school when her father wasn’t around to help with lessons, her relationships with friends, the love she has for her culture – “the things that shaped me into the person I am today.”

“I wrote about how the communist ideology really shaped me,” she said.  “I had a lot to say about it – I wanted to give that point of view to the American people.”

Because the stories are true-life, not fiction, they are relevant “bookmarks in this moment in time,” according to Joe Manning, lead editor and instructor for the project.

“These are historical documents that are valuable to the authors, but to their communities as well,” Manning said.  “We need to hear from these authors; these are voices that are not frequently heard.”

The writing and editing continued when schools closed due to the COVID-19 pandemic, adding to the challenge of the project.

“If the monotony of the day made it a little hard to get inspiration to start writing again, I would just put on headphones and listen to someone singing in Spanish, from Cuba,” Melisa said. “That would help me get inspired, listening to my people.”

Although she never really thought about being a published author, the experience has made her realize that she has much to contribute.

“I think I do want to keep writing books,” she said. “There is so much more to explain.”

As for Craig, his father got out of jail during the school year, while Craig was writing his story, and read the chapter for the first time.  “He wiped away a few tears as he read it,” Craig said.  “It was very emotional because he didn’t know all the things we had been through.  I feel like it brought us closer together.  He understands the situation we were put through while he was gone, and he is going to better himself so we won’t have to go through that again.”