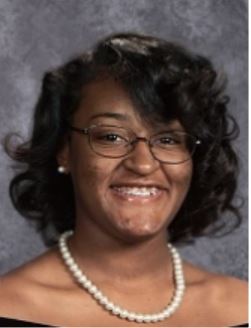 DeNasha Turner is the youngest of four children born and raised by a single mother who often struggled to make ends meet.

"We were all born and raised in the Iroquois Housing Projects, and until I was 11, I shared a room with my sister," she said. "We left the projects for the west end of Louisville—the big yellow house on 41st Street was a dream come true—five bedrooms, a dining room, and a full basement."

Soon, that dream come true would take a heartbreaking turn.

"My mother received government assistance, and my siblings suffered from mental [illness]," Turner said. "Watching my siblings come and go from a mental institution was hard; I missed them a lot when they were gone. My mom struggled to raise and financially support us."

In the middle of her freshman year, Turner said her sister "got in with the wrong crowd and ended up in a bad situation."

"My sister was taken by the state, and that hit my mom really hard," she said. "She felt her absence emotionally and financially, as my sister's income helped keep a roof over our head and food on the table. My mother kept working but wasn't bringing enough home."

The water was cut off first, then the electricity.

"Behind on so many bills, we lost the house six months later," Turner said. "Amid this, I realized that my mother couldn't provide for us because of her lack of education. From that point forward, I focused even more on school. I knew that if I became more educated, I was more likely to be successful."

At the Academy @ Shawnee, Turner participated in the drum line, Girls of Color, National Honor Society, Upward Bound, and the yearbook.

"Throughout high school, I was offered many positions on various extracurricular activities," she said. "Being noticed as a reliable and intelligent student opened many doors for me."

Turner said school became an escape for her throughout her teenage years.

“My junior year, I was nominated to be a student ambassador for the school, giving tours of Shawnee to new and prospective students and parents,” she said. “While doing this, I learned how to obtain fun facts and present myself in a professional manner.”

By the time she turned 18 at the start of her senior year, she had bounced around from home to home. She was also holding down two jobs—one at Target and the other at the Family Dollar.

On Christmas Eve, she got into an argument with her mother and was kicked out of the house. She had enough money saved up to spend a few nights in a hotel, trying to figure out how she would finish high school homeless and on her own.

That's when Anton Caldwell, the librarian at the Academy @ Shawnee, stepped in and gave her a place to stay.

“I don’t know where I would be without Mr. Caldwell and his family,” she said.

Turner will graduate from the Academy @ Shawnee with a 3.4 grade point average (GPA) on June 8.

She will attend Kentucky State University this fall and be the first in her family to attend college.

“DeNasha’s passion and determination show the potential she has to accomplish great things and positively impact those around her,” said Rachelle Wood, the College Access resource teacher at the Academy @ Shawnee.

"Even though she went through that rough time, you would never know it by looking at her," Rice said. "This scholarship will make a difference for her."

This story was originally published by JCPS on May 24, 2019