Eastern Student on KY Board of Education Dives Into New Role

February 18, 2021 – Solyana Mesfin apologized for not returning a text for nearly a week – she was studying for the end-of semester tests and projects, and she’d been “away from her phone.”  It’s that focus and attention to priorities that exemplify her work ethic as she settles into her two-year term as the first student to serve on the Kentucky Board of Education. 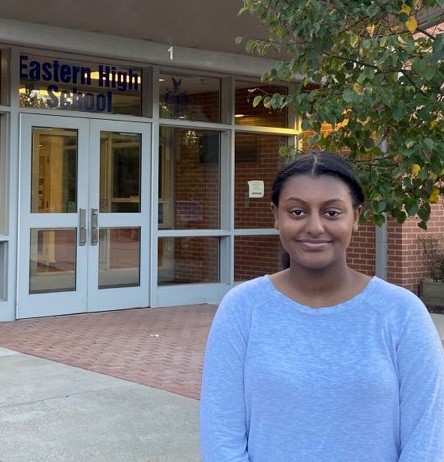 The 16-year-old, a junior at Eastern High School, was appointed to the debut spot as a non-voting member in October. Since then she’s been meeting with as many organizations and students as possible so she can grasp the needs of students across Kentucky, and how to represent them in a positive light.

“I’m really excited to establish what this role means for a student and the projects they can uphold and the things they can do,” Solyana said.  “That’s been my method, to kind of immerse myself into all Kentucky has to offer in education and build up what I think will be beneficial.”

While she said there are many aspects to education that she wants to learn about, the issues she’s focused on are racial equity and mental health issues – two topics she said she’s pleased to see are on the top of fellow KDE members’ minds as well.

“Every single meeting that I go to, racial equity is brought up and the importance of it and how much Kentucky as a state values it,” Solyana said.  “In my other meetings, with the (KDE Commissioner’s Student Advisory) council, we always have a mental health-related discussion. So we can see that KDE is prioritizing it, and we’re truly thankful for that.  We as students hope to bring another perspective to it and hopefully impact it.”

Juggling the role on top of Non-Traditional Instruction (NTI) and her already long list of extracurricular activities has been “extremely challenging,” she admits. She is a member of the Prichard Committee Student Voice Team, the Muhammad Ali Center Council of Students, the National Alliance on Mental Illness Louisville Youth Advisory Council and the National Honor Society, as well as science and environmental clubs.  In addition, she serves as secretary for Eastern’s Black Student Union, vice president of finance for FCCLA (Family, Career and Community Leaders of America), an academic tutor at Hite Elementary school, a Sources of Strength facilitator, a Science Olympiad competitor and is an honorary volunteer for the Tigray Community of Kentucky (Ethiopian Community Center).

To maintain focus and balance her commitments, Solyana said she immerses herself with people who understand and uplift her. “The people I’m surrounded with have helped me emerge into this role, especially since it’s so new and it happened so quickly,” she said.

Once her term is up, she plans to go to college and would like to study something education-related. Solyana also has interests in neurobiology, women’s and gender studies and African American studies to further her work in racial equity.  Whatever she does, she knows she wants to stay in Kentucky and make an impact.

“I feel like I want my work here to be longer,” she said.  “Remaining in Kentucky would give me that avenue to finish my overall desires.”