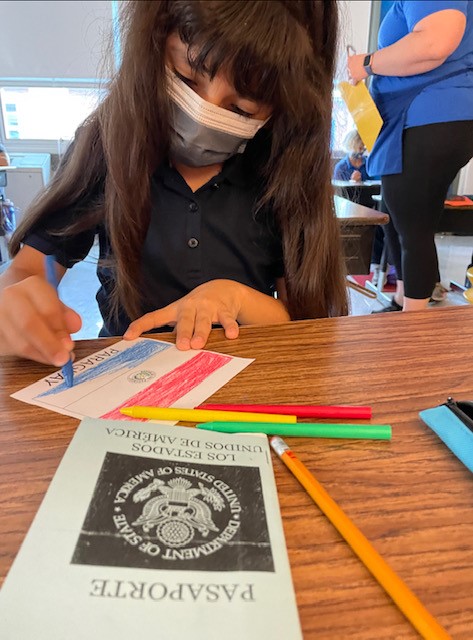 “What are the colors of the Costa Rican flag?” the Hawthorne Elementary School teacher asked, as the students readied to color in the country’s flag before adding it to their booklet of other Spanish-speaking countries.

“Yes! Yes! Azul, blanco, rojo!” Rivera congratulated them. “And what country? Costa Rica! I love how you say that!”

Hispanic Heritage Month may be recognized Sept. 15 – October 15, but at Hawthorne Elementary School, which offers the district’s only full-model Spanish Immersion Program, Hispanic heritage is observed all year.

Still, the school celebrates the special month with zeal. Festivities include the Passport Program, in connection with National Geographic, to give students the opportunity to have passports “stamped” by studying all 21 official Spanish-speaking countries, and completing activities related to that country.  Older students, such as fifth-graders Eli Wright, Ayden Kolter and Aiden Chastain, were recording Spanish monologues of Spanish historical figures to be uploaded to their backpacks.

The Passport Program has been part of Hawthorne’s celebration for several years to further educate students about Spanish speaking countries and cultures, according to Dr. Jamie Neal, Hawthorne’s assistant principal. This year, the pandemic has forced some modifications to the program – the original plan included an optional trip to Puerto Rico – so Hawthorne has partnered with a school in that country for the students to become pen-pals with their Spanish counterparts.

Much of the festivities are coordinated by bilingual instructor Nancy Davila. A native of Puerto Rico, she came to the United States in 2004 and decided “this was a magical place.”  She’s taught at Hawthorne since 2004, and now considers the school her second home.

“Hawthorne provided me with the environment where I can bring my culture, everything I like, to this culture, and they allow me to project to the students what happens out of the United States, and especially about the language,” she said.

“I didn’t even know Bolivia was a Spanish-speaking country,” said Mauricio, a third grader. His class that day was studying Cuba, where he was born and lived until moving to the United States when he was 2.  “At first I forgot almost every single word in Spanish, since English is my primary language now,” he said, but thanks to Hawthorne’s emphasis on the Spanish language and culture, he said he can now carry on a conversation in his native tongue.

Davila said the school will end the month with a celebración de la vida Latina. On Friday, students are allowed to wear their native dress, or the dress of a country they’ve visited, while a DJ plays music throughout all lunch periods.

“They are so excited, and I am so excited to teach them,” Davila said.