Every day counts! That’s the message Jefferson County Public Schools (JCPS) touted as it launched its first-ever districtwide attendance campaign, aimed at motivating students to come to school and miss no more than six days a year.

“Increasing student learning is one of my fundamental priorities as superintendent—and nothing has more of an impact on learning in the classroom than actually being present in the classroom,” Superintendent Dr. Marty Pollio said. “We know that after six missed days, learning drops off significantly and it’s tough for students to catch up. Every day counts, and coming to school daily puts students in the best position for success.” 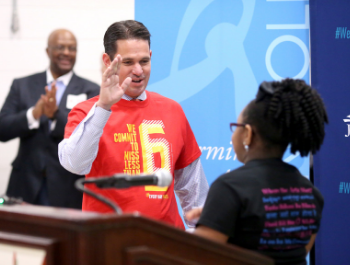 The district kicked off the campaign with a pop-up party at Lincoln Elementary Performing Arts School (LPAS), which is among the 29 regular JCPS schools whose average student attendance this year is 96.5 percent or better, the rate of missing six or fewer days in a school year. Community and school leaders, University of Louisville athletes and radio personalities were also on hand to congratulate the students for making school attendance a priority.

The JCPS goal is more ambitious than the statewide benchmark.  The Kentucky Department of Education (KDE) sets a target of 96 percent average daily attendance, or missing no more than seven days of school, for districts. 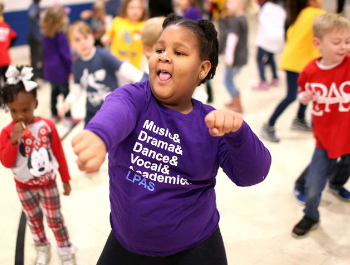 “This is important not just for those of us with children, or just JCPS, but the whole city,” said Mayor Greg Fischer. “Data shows very clearly that when students improve their attendance, they improve their academic prospects, their chances for graduating and going on to college and ultimately, succeeding in life. And for our city to succeed, we need every single one of these kids to succeed and contribute.”

Throughout the campaign, JCPS will celebrate school successes with surprise pop-up parties at locations that have the highest percentage of attendance improvement and largest decrease in chronic absenteeism. Local radio personalities and University of Louisville athletes are helping promote the campaign, and will pop-in to the parties to join the celebration and highlight the schools’ accomplishments.

Other efforts include social media campaigns, individual school challenges, and outreach to parents to raise awareness of the importance of school attendance and opportunities for families to help each other and get their kids to school.

At LPAS, making sure students are in their seats every day is a partnership between the school and families.

“By partnering with our families to help identify and remove the barriers to getting kids to school, we’ve been able to not only set the expectation that students need to be in class every day, but we’ve helped make it possible for parents to meet that expectation,” said LPAS Principal Susan French-Epps. “We’re proud to be creating a ‘culture of attendance.’”

For more information about the initiative, visit JCPSEveryDayCounts.com.