November 18, 2020— Byck Elementary School fifth grader Jamari Tate had originally planned to write a book about Snow White and the Seven Dwarfs for his language arts lesson.  But once he entered Minecraft World, an educational platform that mimics the popular video game, he was inspired by the animals he saw, and changed his focus to a parody of The Three Little Pigs. 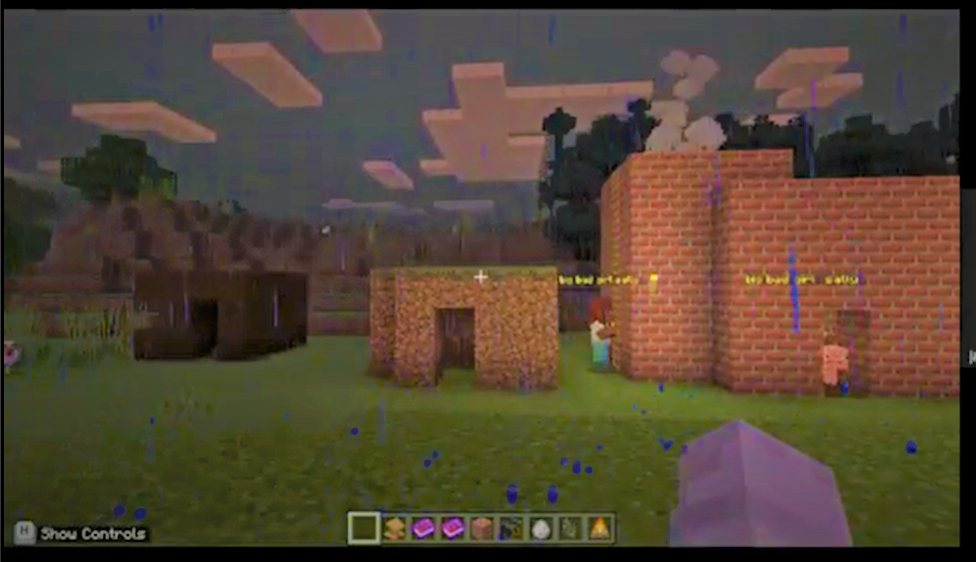 For his version, Jamari used the gaming system to build digital homes out of dirt, sticks and brick. Instead of a Big Bad Wolf who tried to eat the pigs, his story had Big Bad Girl Sally, who knocked on doors looking for some chicken to eat.  And instead of a gruesome outcome, his tale had a happy ending: the pigs realized Sally was just hungry and misunderstood, and they all became friends.

For Jamari, using Minecraft was a fun way to create his story, and since he could revise his book digitally, he was more willing to make changes to perfect his work.  “It’s motivational and educational at the same time,” he said proudly.

JCPS is now a global leader of Minecraft for Education Edition, according to Jim Unger, a school technology coordinator (STC) leader with Jefferson County Public Schools (JCPS.)   Teachers are using Minecraft to give students interactive, engaging learning experiences that tie subjects like math, science, social studies and language arts to platforms they already understand, and enjoy.

“It’s such an incredibly powerful tool,” Unger said, noting that while JCPS has been using Minecraft Education in classrooms for at least the last three years, its use has taken off since lessons moved to remote learning this school year. “We were using it for brick-and-mortar and it transferred so easily to NTI because it’s all software based.”

He said in September, after JCPS had distributed Chromebooks and other devices to all students who needed them, the district had 7,300 unique log-ins on Minecraft Education – a number he expects to have grown significantly since then.

Byck​’s resource teacher, Sarah Yost,​ and academic instructional coach, Jenny Forseth, recently began using the platform with their students because they wanted them to have innovative, engaging experiences.

They utilize Minecraft, for example, to help students visualize how to calculate volume, by having them use characters they create to move blocks and fill a space.  And the system has improved the revision process in writing assignments, Yost said.  Because Minecraft Education mirrors a game, students are more apt to take direction and do the work to revise their writing because they recognize and enjoy that platform.

Forseth agreed. “I think Minecraft is a great tool to increase engagement and get kids actively learning,” she said.  “With Minecraft, kids understand what the expected instruction is.  Students know what they need to do, and they’re able to demonstrate that they understand the principles.”

For Jamari, using Minecraft in his lessons has also given him a confidence boost and a leadership opportunity: because he was already familiar with the game, he was able to teach other students and even his teachers how the game worked.