Elena Kamenetzky, a Japanese teacher at Eastern High School, is the 2019 recipient of the Kentucky World Language Association (KWLA) Outstanding Teacher of the Year Award. She received the award Sept. 28 at the KWLA annual conference in Lexington.

Before coming to teach Japanese at Eastern High School in 2010, Ms. Kamenetzky was an assistant teacher of English at two middle schools as part of the JET Program in Achi Village, Japan from 2006 to 2009. 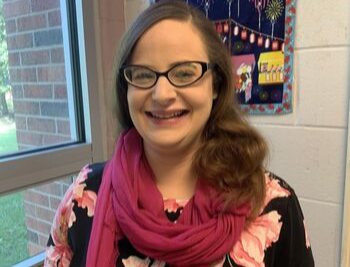 Kamenetzky earned her Bachelor’s in Asian Studies with minors in Education and Linguistics from Macalester College in Saint Paul, Minnesota. She earned her credentials for teaching Japanese, Grades K-12 through the Master of Arts in Teaching (MAT) Program from Northern Kentucky University in 2010.

In addition to teaching, she has served on the board of the Kentucky World Language Association as President of the Kentucky Association of Japanese Language Teachers, or KAJLT, from 2014 to 2016. She also has served KAJLT as vice president and treasurer as well as mentoring current and future Japanese teachers through hosting student teachers and presenting at conferences.

The list of awards and achievements won by students under her guidance is extensive: Kentucky State Japan Bowl Champions in 2015, multiple awards won in the Bluegrass Area Japanese Speech Contest from 2012-2018 and have taken home top awards in all categories of Japanese performance every year from 2013-2018 at the Kentucky World Language Showcase sponsored by KWLA. Adding to awards and achievements, her success in getting her students to experience the culture from which the Japanese language comes is also full and rich. Summer trips to Japan every two years led by Ms. Kamenetzky and arranged through the New Perspectives Japan Program facilitated by PAX Laurasian Exchange open the Japanese-speaking world to her students through experiencing firsthand cultural activities in Tokyo, Kyoto, Nara, and Fukushima.

The six other candidates for KWLA’s Outstanding Teacher of the Year Award, who represented Kentucky chapters of professional language organizations, included: