Contestants scored based on their speech content, poise and presentation.

Michael Morgan, a senior at duPont Manual High School, won a total of $17,500 in scholarships after placing second at the fourth annual Optimist Oratorical World Championship, in St. Louis, July 19-20. 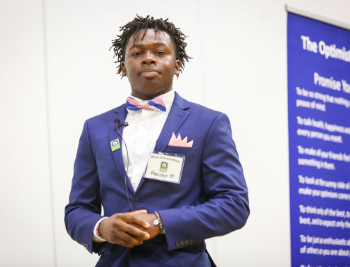 Morgan was among more than 25,000 students from around the world who competed in local and district Optimist Oratorical Contests, before advancing to the World Championship held at Saint Louis University.

More than 60 students from North America, as well as Russia and Pakistan, competed digitally and in person, delivering a 4- to 5-minute speech on the topic “Is there a fine line between Optimism and reality?” Judges scored contestants based on their speech content, poise and presentation.

“The competitors in our Oratorical World Championships are developing skills that will serve them well as leaders in business, politics, the arts and numerous other fields,” Optimist International President Rebecca Butler Mona said. “These young people exhibit the hope and positive vision that lies at the core of our mission as Optimists, and that’s why this program has endured for more than 90 years.”

Alyse Saucedo, of San Diego, California, won a $15,000 scholarship for her first place win, and Dylan Hyun, of Cleveland, Ohio, won third place and a scholarship of $5,000. This is in addition to scholarships won in local, district and regional contests, which totals $17,500 for Michael’s second-place win. The Optimist International Foundation funds the scholarships. 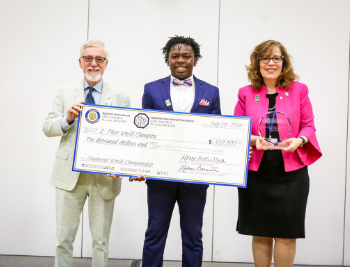 The Optimist Oratorical Contest is the longest-running program of Optimist International, dating to 1928, and involving more than 25,000 students around the world annually. Successful alumni of the program include Vice President Mike Pence, actor Neil Patrick Harris, and actress Julia Roberts. In 2016, the competition was expanded to the World level.

Saint Louis University offers additional scholarship money for winners who elect to attend SLU. Students and teachers interested in learning more about the Optimist Oratorical Competition or other scholarship opportunities are encouraged to visit www.optimist.org/scholarships.