Mike Losey has been named the new principal of Atkinson Academy.

An educator for 11 years in both Jefferson County Public Schools (JCPS) and in Indiana, Losey most recently served as assistant principal at McFerran Preparatory Academy. Throughout his career, he has also served as an elementary school principal, goal clarity coach, and teacher for grades 1 and 2, and said his passion has been working in Title 1 buildings. 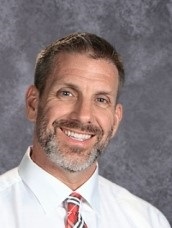 “I have found my experiences serving communities of generational poverty to be the most rewarding,” Losey said.  “I believe that in Title 1 schools, I have been able to make the greatest positive impact on students and families.”

Though he began his career in education later in life, going back to college when he was 29 to get a second bachelor’s degree and then a master’s degree in education, teaching has always been a part of his background.  His father was a principal for 35 years before retiring to head the Secondary Education program at Indiana University Southeast; his mother has worked as a school secretary for 25 years; and both his siblings are educators.

That foundation has helped him see the importance of relationships between teachers and students.

“I believe relationships drive everything we do in schools,” Losey said.  “I have worked tirelessly to forge relationships with students, staff, family, and colleagues throughout the profession.  I am excited to be part of the shift in JCPS as we embrace the Backpack of Success Skills using our digital backpacks, and I am looking forward to assuming a greater leadership role at the building level during this exciting time for our district.”

“Mr. Losey has distinguished himself as a teacher, instructional coach, and assistant principal in JCPS,” said Dr. Nate Meyer, assistant superintendent of Accelerated Improvement Schools (AIS).  “He is a dynamic instructional leader and his strengths directly align with the improvement priorities for Atkinson. We are thrilled to keep him in the AIS family.”