On February 13, Robert Fisher, an engineering teacher at Olmsted Academy North, was presented the Excellence in Classroom and Educational Leadership (ExCEL) Award. Representatives from Jefferson County Public Schools (JCPS) and from the award sponsors — LG&E and KU and WHAS11 — honored the teacher this afternoon during a ceremony at the school.

Fisher began his career at Olmsted North as a math teacher, eventually becoming team leader, and was integral in the school’s decision to become a Science, Technology, Engineering, Arts and Math (STEAM) magnet, according to Olmsted North Principal Ryan Rodosky.  In addition, he developed the school’s mechanical engineering program from the ground up. 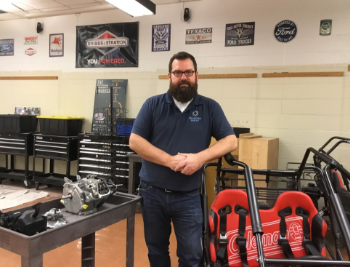 “I trusted in his idea and I am so thrilled with the results,” Rodosky said. “I never imagined that we would have middle school students building their own workbenches, repairing engines and constructing their own arcade game consoles.  The students are so proud of their work and their development of marketable skills.”

As part of LG&E and KU’s commitment to supporting education across the communities it serves, Fisher and other ExCEL Award-winning teachers each receive a $1,000 instructional grant from the company.