‘A great haircut can make anyone feel good about themselves’

September 7, 2021 – Emmanuel Matsekeza settled into the barber chair, the plastic white cape draped around his shoulders, and told the barber what he wanted: waves.  It was the first time the Newburg Middle School seventh-grader had ever asked for the style, “but I’ve just wanted them for a long time,” he said.

Barber CJ Carter took his time, clipping the teen’s hair, the whir of the trimmer buzzing in the one-chair shop.

“Tell me if you think this is the length that you want,” Carter said, checking his work as he whisked hair from Emmanuel’s shoulders with a duster brush. “You want it a little lower than that? Now I’ve got to do your taper.”

Even before it was finished, the professional haircut made Emmanuel feel like a new man. 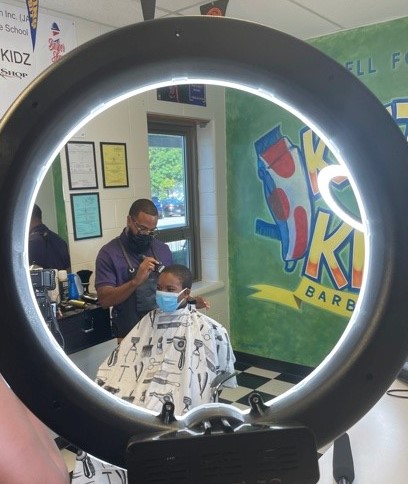 Emmanuel was the first client at Newburg’s new Kutz 4 Kidz, the only licensed in-school barbershop in Kentucky. School and community officials today cut the ribbon on the shop, complete with a red, white and blue barber’s pole and located mere feet from the school’s multi-purpose area.  The shop will be open for services two days a week for Newburg students, boys and girls, free of charge.

Sponsored by the Jo Adell Foundation, the barbershop will have “a lot of impact to this community, and it matters to these kids,” said Scott Adell, the foundation’s executive director.

Eighth-grader Ke’Shon Davis recalled how he would get into trouble for wearing a hat in school, in violation of school policies, because he was embarrassed by his hair. He was so upset he even wrote a letter to Principal Nicole Adell asking if students could wear caps to help avoid being the target of bullying.

Although the location is a full-service shop, Kutz 4 Kidz offers more than just haircuts, according to Ronnie Stoner, Newburg’s youth service center director.  The shop will be an outlet for students to “create relationships, have a voice and develop confidence when walking out.”

“A great haircut can make anyone feel good about themselves,” he said. “When you look good, you feel good. And when you feel good, your self-esteem increases.”

Something as simple as a haircut plays a major role in academic success, he added. A good haircut creates “swag” – a type of confidence that will extend to the classroom and into the community.

“Having the largest public school system in the state of Kentucky actually establish a barbershop here at Newburg Middle School is truly monumental,” he said. “A barbershop is a real foundation. It is a source of refuge. It is a sense of sanctuary. A support system. It’s a communication hub. It’s a country club. Quite frankly, this is the only institution that we as Black men control in this country.”

For Ke’Shon, the opening of the barbershop wasn’t the only good news he heard on Tuesday.

Principal Adell announced she had taken his idea to the school’s site-based decision-making council, which voted to allow students to wear hats one day a month inside the building.

And as for Emmanuel, having the shop as close as his cafeteria has its advantages.

“It’s very helpful,” he said, adding that he’ll come back for future cuts.  “You don’t have to worry about people judging you for your hair.”