She has been at Moore for four years and most recently served as the interim principal. 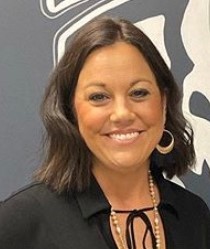 Traci Morris has been named the new principal at Marion C. Moore School. The position makes permanent a role she has held in an interim capacity since November, when former principal Rob Fulk was tapped to lead Iroquois High School.

Now in her sixteenth year as an educator, Morris began her career as an English teacher before becoming an assistant principal and later principal in other districts.

When Fulk was originally hired at Moore, he recruited her to Jefferson County Public Schools (JCPS) to serve on his leadership team.

“One of the great things about coming into a building with an educator that you’ve worked with before and bought into is you already know your visions and philosophies are aligned,” Morris said.  “But we’re also two different people, and I think I bring a different personality, a different flair to things.”

One of the things she’s most proud of since coming to Moore is the rebuilding of the culture within the school community.  “We’re building a place that people are really proud of, both students and staff,” she said.

“Ms. Morris is a strong instructional leader and will work tirelessly to increase student achievement,” said Christy Rogers, assistant superintendent of high schools for JCPS. “She is a huge advocate for her students, and she will ensure all students, teachers, and parents have a voice and a strong sense of belonging.”

Morris holds bachelor’s and master’s degrees from Western Kentucky University and earned her Rank I from the University of the Cumberlands.

She is excited to build on the change that she’s been part of for the past four years.

“It’s a very special place,” she said. “Our students are very lucky to have a staff who are as compassionate and involved as they are, and at the same time, we’re very lucky to have the kids that we have.  This didn’t just happen—it was intentional. And it’s so important that we continue this work.”