Shirley Botkins'' 'Public Schools' entry from The Encyclopedia of Louisville ( c2001), edited by John Kleber. Reprinted with permission by the University Press of Kentucky. This entry is now historical and abridged.

PUBLIC SCHOOLS. The first Charter of the City of Louisville was granted by the General Assembly of the Commonwealth of Kentucky on February 13, 1828. The Act gave the city the authority to establish "free schools." On April 24, 1829, the mayor and the councilmen passed an ordinance to establish the first public schools in each ward of the city and to levy a property tax for school purposes, for all children under sixteen years of age. The first trustees selected under the ordinance were James Guthrie, John P. Harrison, William Sale, James Overstreet, Fortunatus Cosby Jr., and Samuel Dickinson. Dr. Mann Butler was selected as the head of the public school, and on August 17, 1829, a school was opened at the southwest corner of Fifth and Green (Liberty) Streets in the rented upper story of the Baptist Church with an enrollment of 250 pupils. Instruction was confined to the common branches of English studies, with no fee for tuition; thus, it was the first free school established by law in Louisville and in Kentucky. The following year a new schoolhouse was built on the corner of Fifth and Walnut (Muhammad Ali Blvd.) Streets, on a lot on Fifth St. and running through to Centre St. The property was purchased from James Guthrie and Edward Shippen for $2,100.

Although the charter provided for free schools, when the new building was occupied, tuition was charged. The tuition consisted of $1.00 per quarter in the primary grades and $1.50 in other departments. The trustees could waive the fee if, in their judgment, pupils were unable to pay. The students were in school from 8:00 a.m. to 12:00 noon and from 2:00 to 6:00 p.m., from October to April. Holidays were Saturdays and Sundays and one week from Christmas to January 2. The City Council directed that the first school be conducted using the monitorial, or Lancastrian, system of teaching. This system’s chief feature was the selection of monitors or subteachers from the more apt scholars, who instructed the other pupils while the principal teacher and assistants supervised and gave special instructions to other monitors. Lessons were studied only at school, not at home, because of the necessity to use candles, grease lamps, and kerosene for home lighting. The fact that the town was small, making the distance from school to home short in the days when Louisville's first school opened, explains the long school day.

Because the city of Louisville had demonstrated its ability to maintain public schools, the state gave half of the Jefferson Seminary property to Louisville for the purpose of erecting a "High School College," and by 1838 the city had a complete school system under its control. The 1837 report of the trustees of the Louisville public schools noted an enrollment of 716 students. It was not until 1851 that tuition was abolished for all residents of the city of Louisville. The Male High School and Female High School opened in 1856. In the two decades between 1851 and 1871, twenty lots were purchased and seventeen schools built. The enrollment increased from 4,303 in 1851 to 13,503 in 1871, and the number of teachers increased from 43 to 276.

In 1934 the state legislature completely revised and codified state school laws, and the resulting New School Code reduced to two the number of types of school districts, to be known as county districts and independent districts (Jefferson County was a county district and Louisville an independent district). Enrollment in the Jefferson County schools was 36,308 (34,911 white and 1,397 black) in the 1956 school year. In 1974, the last year in which the Jefferson County School District was a separate district, the enrollment was 89,405 (84,666 white and 4,739 black).

On February 28, 1975, the state Board of Education ordered the merger of the Louisville and Jefferson County school systems effective April 1, 1975. On April 21, 1975, the Supreme Court denied appeals to reverse a Sixth Circuit Court order, and on July 17, 1975, a final order to U.S. District judge James F. Gordon stipulated that a desegregation plan would be implemented at the beginning of the 1975–76 school year, which began on September 4, 1975. Ernest C. Grayson, former Jefferson County public school district deputy superintendent, became the first superintendent of the merged districts.

In 1978 Judge Gordon ended the court's active supervision of the desegregation plan. However, the order was never fully lifted. The Jefferson County public school district continued mandatory busing but changed its racial guidelines. In 1984 the desegregation plan for middle and high schools was changed to a system of zones and satellite areas. Mandatory busing was replaced in 1992 by a program designed to integrate elementary schools by giving parents a choice of schools. Racial guidelines were altered with each of the above plans. In 1996 the district approved a new integration plan requiring that all schools maintain racial guidelines of between 15 and 50 percent African American. Six black parents sued in 1998 to eliminate the student assignment plan based on race that limits the number of African Americans who can enroll in Central High School to a maximum of 50 percent.

On June 10, 1999, U.S. District judge John G. Heyburn II ruled that U.S. District judge James F. Gordon did not dissolve his 1975 desegregation decree in 1978. Portions of Judge Gordon’s decree remain in effect. Judge Heyburn also ruled that the Jefferson County Board of Education may use racial classifications to prevent the reemergence of racially identifiable schools and gave anyone wanting to see the remaining parts of the 1975 desegregation decree dissolved until July 12, 1999, to file the motion. On June 15, 1999, lawyers for a parents' group filed a motion to dissolve the 1975 decree.

The Kentucky Education Reform Act (KERA) of 1990, and subsequent amendments by the General Assembly, were enacted to improve Kentucky’s system of public education. The KERA became law on July 13, 1990. Jefferson County Public Schools, as well as the entire state of Kentucky, began a new era of educational opportunity, designed to improve an efficient system of common schools.

See Marie T. Doyle, "The Public School Merger Issue in Jefferson County, Kentucky", Ph.D. diss., University of Kentucky, 1975; George D. Wilson, A Century of Negro Education in Louisville, Ky., published by Louisville Municipal College as a report on Official Project No. 66543-3-77-2 conducted under the auspices of the Work Projects Administration, 1941; Reports of the Commission of the Common Schools of Jefferson County to the Superintendent of Public Instruction, 1876-77, microfilm; Reports Communicated to Both Branches of the Legislature of Kentucky at the December Session, 1840; Annual Progress Report, Jefferson County Public Schools, 1974, 1984, 1999; Annual Statistical Report, Jefferson County Public Schools, 1979, 1979. 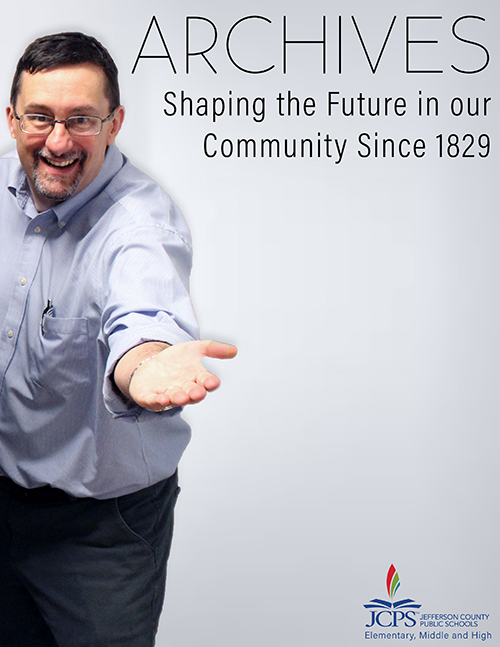