He is the sixth superintendent of the state's largest school district since merger in 1975.
By Toni Konz Tatman | JCPS Communications 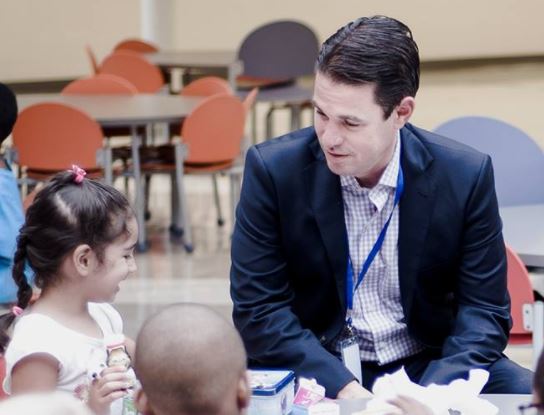 “Dr. Pollio stepped in to lead our district on an interim basis during a very difficult time,” said Diane Porter, chairwoman of the Jefferson County Board of Education.

“During the past eight months, he’s brought stability, reenergized our district and focused our priorities on what our schools and staff need to make all students successful,” Porter said. “I know his leadership at JCPS will be student-centered, student-focused and student-driven, which is just what our district needs.”

The announcement was made after the school board met for five hours during a special-called meeting, during which they went over interview questions and then went into a closed session to interview both Pollio and the other finalist, JCPS Chief Operations Officer Mike Raisor, on why they should be the next superintendent.

The school board then came back into open session, voting unanimously to name Pollio as superintendent and to immediately enter into contract negotiations with him.

“The board made a bold decision when it chose me for this position eight months ago,” Pollio said.  “I plan to bring the same passion, energy and focus to work every day to create positive learning environments at all of our schools where teachers can teach and students can learn.”

Pollio added that the job is “not just professional” to him, “it’s personal.”

“For more than 20 years, I’ve dedicated my career to serving the students of JCPS and my daughter is a student in this district,” he said. “Now is the time for our employees, our staff and this community to stand up and support JCPS and bring about positive change for students by working together.”

Porter said that Pollio had received the recommendation of the Superintendent Screening Committee, which was charged with reviewing the applications of the candidates and interviewing both finalists.

Pollio, 46, received his undergraduate degree from Indiana University and his master’s degree from Eastern Kentucky University.  He earned his doctorate from the University of Louisville in 2012.

He is the sixth person to lead JCPS since the district merged with the Louisville Public Schools district on April 1, 1975. Pollio replaces Donna Hargens, who resigned from the position on July 1.

The board advertised the search nationally and engaged a local firm to receive community feedback and input. There were nine applications for the position, and the board named Pollio and Raisor finalists in January.  Both participated in four community forums earlier this month.

Although both Raisor and Pollio were interviewed in closed session, the school board later released the list of questions each finalist was asked during their interviews.

The questions ranged from what each candidate thought was the most immediate challenge to the district and what their plans were to address it; how they would approach closing the achievement gap among various student groups and how they would suggest improving student safety.

They were also asked to describe their fiscal management style and ensure proper oversight over finances and how much authority should principals be given in order to effectively manage the long term success of their school communities.

“It’s hard to imagine how much my life has changed during the last year, but one thing I know to be true is that I love my job,” Pollio said. “I wake up every day inspired to build a better school district for my daughter and for all of our JCPS students.”

He started his career with JCPS in 1997 at Shawnee and went on to serve as a teacher and assistant principal at Waggener High School before taking the helm as principal of Jeffersontown High School from 2007-2015.

Pollio was in his second year as a principal at Doss High School when the school board named him acting superintendent last May. He took a leave of absence from that position when he took over the interim position on July 2.

Pollio’s top priorities when he took over as acting superintendent were to improve culture and climate within the district and schools, tighten organizational coherence and increase student learning and achievement.

“To put it simply, we had a lot of work to do,” he said, adding that morale was at an all-time low, the district had been under audit by the Kentucky Department of Education, and there were multiple barriers to learning for families across JCPS.

“From my years as a principal in JCPS, I know that the key to a successful school district is creating a culture in every school where students feel a sense of belonging, are engaged and are truly passionate about learning,” Pollio said.

Two months into the 2017-18 year, he ordered a Mini Comprehensive School Survey to "check the pulse" of those two areas.

Of those who responded, nearly 90 percent of staff said they believed central office administration were providing effective leadership for schools, up 38 percent from when employees were last surveyed in spring 2017.

“We’ve also worked in partnership with KDE to ensure compliance with all laws and regulations set forth in its recommendations,” he said.  “We’ve started the process of redirecting funds from central office to the classroom to better support schools and students.”

Pollio says he knows there is still a lot of work left to do.

“I believe that the most important experience that our next superintendent can have is an intense knowledge and understanding of the needs of the students and schools of Jefferson County,” he said.

Porter noted that while Pollio “may think the last eight months have been the longest job interview of his life, he’s really spent the past 23 years in JCPS building up to this moment.”

“Over the past eight months, he’s shown he can steady this ship, he can drive change and he can make us smile along the way,” she said.